Dads do it differently: a difference you can see 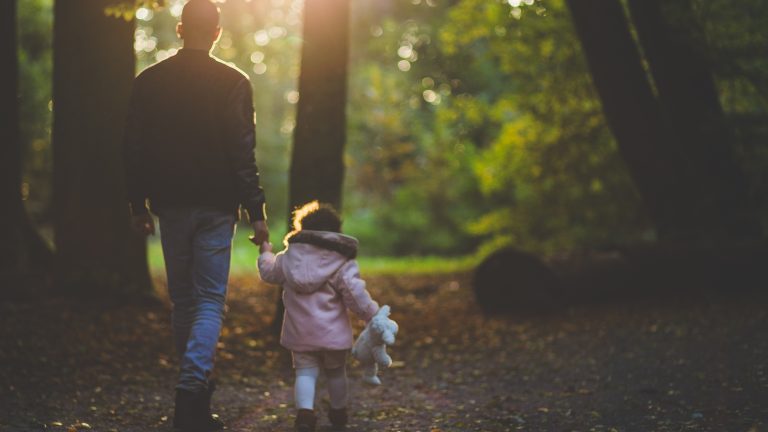 Dads bring different skills and tendencies to parenting – and their “natural style” tends to differ from women’s.   These two “typical approaches” complement each other –  kids benefit most from having both.

Yale’s Kyle Pruett is an expert on how fathers parent.   His research covers many factors, but he has measured one difference that’s easy to see, and is symbolic of a specific benefit of father care.

Look at your old family group photos – even over the generations.   In the photos, just like on the street, men (fathers and uncles and grandfather and even older brothers) tend to hold small children face forward, so the child is facing out, while women tend to hold the child inward, facing them, or over their shoulder.

Men will look the same direction as the child, while mothers tend to keep and hold more eye contact.

In all of these positions, father and baby look outwards, in the same direction.   While the stereotypical “Mom” position says “I’ve got you – you and I are together,” the dad positions say:  “Hey – we’re looking at the outside world together, and I’ve (literally) got your back.”

While gender is explosive to discuss, scientists have found many differences in how men/fathers tend to play with babies, touch them, talk to them, and benefit them.   Every family is different, but these “typical” differences can be interesting.

The kids know the difference – from a young age

By 8 weeks, infants can anticipate “Dad Handling” vs. “Mom Handling.”    Harvard Medical School Professor Michael Yogman studied this – his work showed how when approached by their mother, infants slowed and regulated their heart and respiratory rates, relaxed their shoulders, and lowered their eyelids (“Awww…It’s Mom”).  On the other hand, when fathers approached, the infant’s heart and respiratory rates quickened, shoulders lifted up, and eyes widened and brightened (“Here comes Dad – it’s party time!”)

French psychologist Florence Labrell is among those who suggest that this non-conventional quality of father-child interactions has positive implications for children’s development, particularly in developing their faith in themselves to be creative and take intellectual risks.

How this plays out in the family

We’ve all seen it.  Mom says:  “Look how he’s throwing my baby around – does he really not get that her physical safety is important?”  …  and Dad says  “Lighten up.  We’re just playing – she’s learning how to have a good time.”

As is so often the case in couple conflicts, both sides are “right:”   Both roles are needed, and helpful.   Male rambunctiousness and female safety consciousness both have their place – and both genders (and their children) can benefit from individual parents who can bring both “traditional male” and “traditional female” traits to the parent/child relationship.

… and how does this play out in Strong Start™ classes?

We’d rather our dads don’t throw their kids around … much.   The greater opportunity for men is from channeling their instinct to challenge their children differently, and to learning to support the resulting self-development.     By developing “Relationship Tools” and a “Framework of Interaction,” our dads learn to do better, and to have more fun with their kids, even when they aren’t airborne.